Now there's no excuse not to play us online:

Excited to see your Belgium play, beating that Brazil team was a fantastic achievement!

An interesting matchup: on one side, a rather uninspired and unnattractive France which despite reaching the semifinals was definitely not pleasing the fans with their brand of football. On the other, a surprising Belgium who had eliminated one of the favourites to win the cup, Brazil.
As the ball begins to roll it's becoming quite obvious to understand why Belgium reached such heights: their great defensive organization and fluid offense leaves France quite astonished. However, this french team is physical and well-organized at the back, leaving little room for the opponent to create clear-cut-chances. As it had happened against @mattmid's Uruguay in the previous round, it's on the counterattack that they become more dangerous.
Trezeguet manages to score (37') on a rather gritty play which led to him score after a rebound of his own shot. Few players in the world would've had the ability to react as quickly as he did, even quicker than the defender. France is up 1-0.
Shortly after the halftime break, the great Zidane finally appears and throws the dagger on Belgium with a wonderful work near the corner of the box, faking a few defenders and then shooting a placed shot, no chances for Belgium's keeper to reach it. 2-0.

Now it was time for the managers to showcase their talents: @miguelfcp had to protect his lead and @lazoli had to overcome a deficit with little time left to play. Belgium decided to change his 4-4-2 to a rather attacking 4-3-3 and for a while after that change, their offense is looking renewed and for the first time in this competition, France is looking like they won't be able to sustain the offensive threat. The new tactic is opening up holes everywhere, but still they manage to not concede clear chances at goal.
Then, France decided to change their 4-4-2 into a 4-5-1 with Henry as a LMF and Trezeguet alone up front. Shortly after, Zidane is out for Mavuba, a workhorse to protect the midfield alongside Vieira and Makelele. This definitely worked as France regain their defensive balance and though Belgium tried everything they could to get a goal in, their effort was not enough to change the result. France wins it 2-0 and advances to the final to face either Croatia or Sweden. 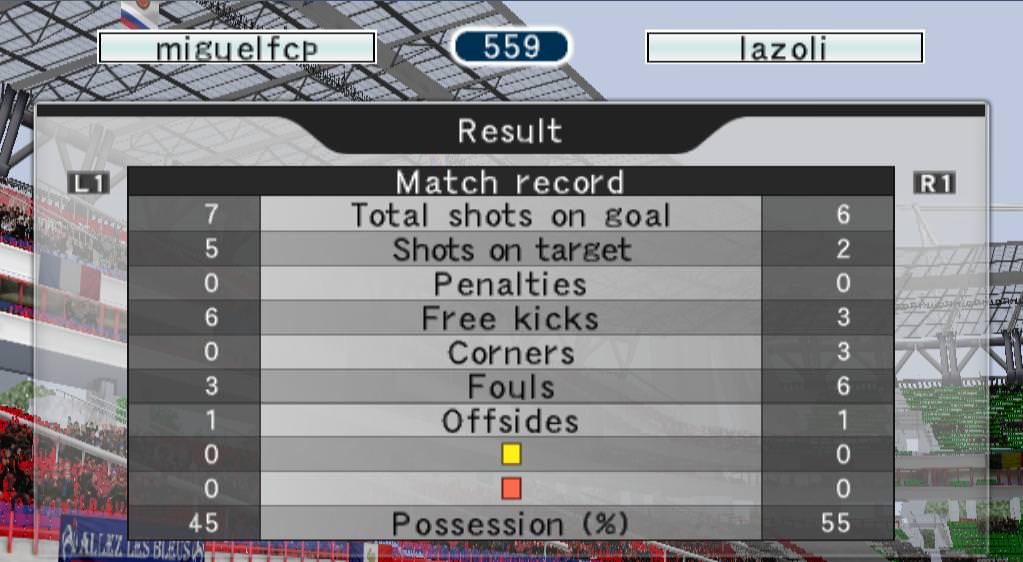 I will download the patch antr try it.
WE9LE is the best game ever

Second semi-final game. Croatia vs Sweden. Everybody thought this was going to be another close battle between the two teams, even bets were made before the game hinted that.
So right after the kick off whistle at 11 UK time, clearly both sides were searching for an early goal and control the game...Croatians started well. They were trying to keep their defense compact and hit their opponent with quick counters. That was clearly the plan...The opening goal came early at the 10th minute. Prso’s first of the day! It all started basically from a bad pass by Sweden’s Edman putting his teammate Farnerud in a bad situation where he didn’t have any choice but give away the ball right at the midfield. But that goal actually changed the game for Sweden and woke them up a little bit. They started looking for that goal even harder now but leaving gaps in the back at the same time.
They had quiet a few shots at the goal but Croatian goalkeeper Butina wasn’t going to let anything in today. He was determined to keep it a clean sheet...It was the 30th minute when Kranjcar found the back of the net from a nice assist from Klasnic!
Second half. Croatia switched to a more defensive formation while Sweden took a more attacking approach because they were down by 2 at the half. So even though this clearly worked for Sweden for a while and they had their chances, they just could not score. Butina, again was too much for Sweden...Then out of nowhere Prso, in his new position in the second half as a SS, headed it into the goal from a corner which made it 3-0 and that made things really comfortable for the team with the checkered jersey!
Croatians were not done yet. They saved the best goal for last. Because Sweden was desperately looking for a goal left them vulnerable on defense. Klasnic took advantage of that and assisted Prso over Sweden’s defense which put Prso in a 1 on 1 situation with the goalkeeper. He lifted the ball for a pretty lob over him. His third of the day. 4-0

Hi
this is so great
I want to join

@Nesta1313 Please follow post #1 to install the game with online patch. Then, please pm @lazoli for network registration on the online server

So at the risk of sounding like a noob, I assume that in order for us to play online, we actually need to schedule who's playing who and an agreed time to play each other?

I'm well up for this but my life and free time is hectic so I do need to make arrangements in advance to play.

@MafiaMurderBag: Glad you bring that up. We've been discussing the creation of a league where users could play a shorter number of matches per week, instead of the daily fixtures we've been doing on our online "Lesser League", in order to get people who have less availability to participate too. If we can grow our WE9LE online crowd, the greater number of people participating would mean that we could have competitions with frequent fixtures whilst not having to ask every player to play...frequently. That'd be ideal, and it would also make it easier to build a calendar of fixtures for a competition that would span over a longer period of time.

So for people interested in playing online with us on WE9LE, would you be also be interested in joining a league where each one of us played 1/2/3 matches a week, tops?

@miguelfcp definatley, I think I can handle that!
M

@MafiaMurderBag To go on from what @miguelfcp was saying , alongside a more casual go online and have a few friendlies or cups and so on which a lot of people may not have time for, we had the idea of running one (or more) of the actual leagues in the game over the course of the season. So there's say 1, sometimes 2 games in a week and you could play them any time during the week then whenever is convenient for the players.

hi guys, im having some troubles to start the game, i do everything you guys said, but the game dont even start
Its possible to run on windows 7 64 bits?

Nesta1313 said:
hi guys, im having some troubles to start the game, i do everything you guys said, but the game dont even start
Its possible to run on windows 7 64 bits?
Click to expand...

I succeded to log in and now i have joined the club.

Nesta1313 said:
hi guys, im having some troubles to start the game, i do everything you guys said, but the game dont even start
Its possible to run on windows 7 64 bits?
Click to expand...

What does it say? Do you get a message when you try to start? Did you install the sany installer, this might be why, you have to install the wel9e game from the link in Miguel's post otherwise it won't work online as sany's installer is a different path to the folders than the files you have to overwrite from Lazoli.
Last edited: 19 July 2018

What does it say? Do you get a message when you try to start? Did you install the sany installer, this might be why, you have to install the wel9e game from the link in Miguel's post otherwise it won't work online as sany's installer is a different path to the folders than the files you have to overwrite from Lazoli.
Click to expand...

doesnt say anything, just dont open the game, but in task manager im able to see the process running
M

Hmmm, did you try changing the compatibility of the .exe?

mattmid said:
Hmmm, did you try changing the compatibility of the .exe?
Click to expand...

everything works fine in another pc, the game opens normal

mattmid said:
Hmmm, did you try changing the compatibility of the .exe?
Click to expand...

Nope, I just hit the on button on my Playstation 2, green light comes on and the humming and whirring little box springs to life, quite simple really. The foofery, faffery and before that getting the flippin' game to be compatible must be head-wrecking and mind scrambling ?

hi guys
do i need to scheduled the time to play?
everytime that i log to the server i dont find anyone online

Nesta1313 said:
hi guys
do i need to scheduled the time to play?
everytime that i log to the server i dont find anyone online
Click to expand...

Yes. We usually arrange games via private messages on here.

Hi guys! I have installed the game following the install details and I am now at point 6! I would love to join you guys, but I will only be able to play very few time a week (either in the afternoon or after 10 pm uk time), if that's ok?

Also I have a question: Did you change anything to have your turf looking that green? On my game they look almost grey. Other colours, stadium and kits are fine though.
Last edited: 7 August 2018

@papinho81 replied to your pm in case if you haven’t noticed.

About the grass. I think people use their own stadiums through kitserver so you can use whichever stadium you want now.
One other thing, if you want the colors to pop out a little bit more, change digital vibrance(Nvdia) in your graphics card settings. I set mine to around 70 and that makes a big difference. Hope this helps.

how many players do we have on this project?
i never found anyone online, i've only played one game against lazoli
You must log in or register to reply here.