mattmid said:
I'm trying to see if I can shoehorn Antonio into all 11 positions
Click to expand...

PotatoCouch said:
Arsenal are just awful aren't they; can't even play with 11 and they decided to reduce their # to 10

Several seasons of buying very average or lightweight players has left them looking like a mid table team at best. I know Keane was joking last season when he said I think they'll have enough to stay up, I'm not so sure this season at this rate!


Chris Davies said:
r Gray at Everton (who I do think is a hell of a talent), which helped.
Click to expand...

I was always surprised he never got more games at Leicester, always looked good when I saw him.


Buzzy said:
I feel the same as in getting rid of Xhaka, with Arsenal's current situation i don't think he will get me many points. I feel i can get better performers for the
Click to expand...

Xhaka is an awful player I think. Given lots of time on the ball (like in the Euro's) and he looks half decent as he's not a bad passer of the ball. In the Premier though he rarely gets time for that. He is one of the most unathletic players I've ever seen at that level as well. And he is forever just one tackle away from an early bath. The fact he's still first choice in the Arsenal midfield and they gave him a new contract tells you all you need to know about why Arsenal are in the mess they are.

What an idiot! i have just found out (should have read the rules more) that my bench boost and triple captain can only be played once a season. I assumed that we could choose weekly.

Managed to accrue 70 points in the last game week, which ended up around 16 points above the average.

But I really wanted to replace some of the very obvious dead-wood. Particularly the guys who rarely play now (John Stones, Ben White, even Firmino).

I was going to settle for replacing Firmino with Jesus - but that was too many City players, so I had to get rid of someone else. Swapping Stones with Matip was too expensive... So I considered using my "free hit" chip.

Then I thought, sod it. I've got points to burn. Bring on the 4-points penalties...

...I think I've made a mistake. I've spent 16 points - taking me down to exactly the average.

AND, I still need a new keeper! 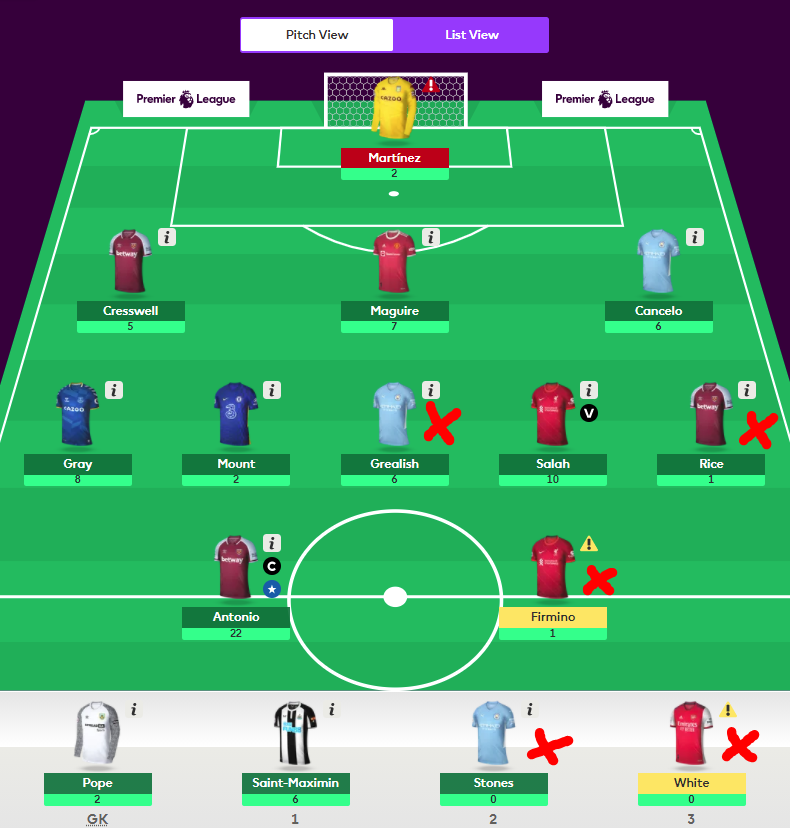 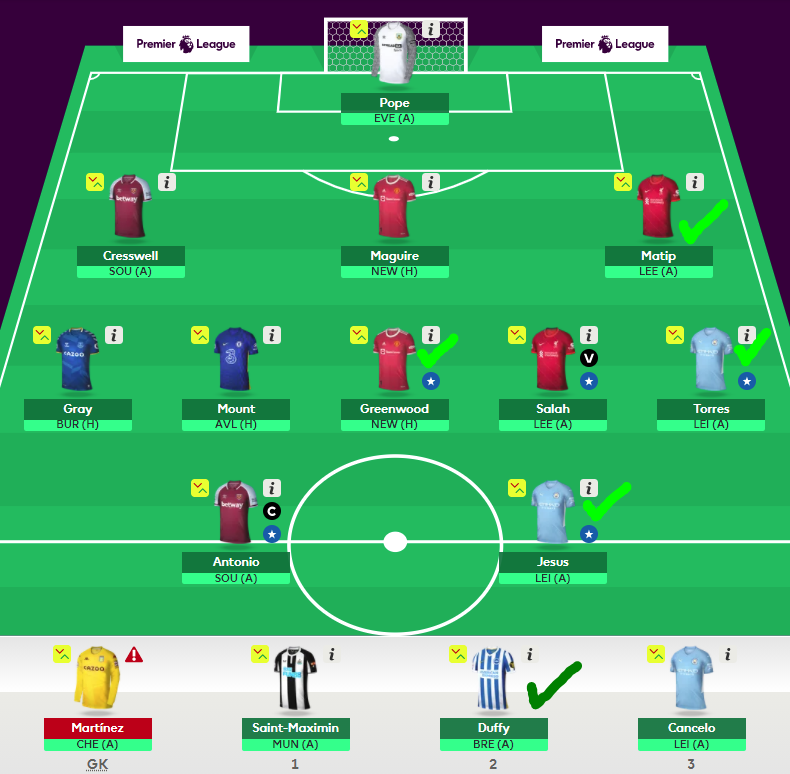 @Chris Davies You know what will happen now, another 2-3 will get injured on international duty!

I'll easy take -8 points (three transfers) on any given week. That's probably at the point you'll break even if your new players performan only slightly better.

Wondering when it's wildcard time...

Made some transfers for this game week. Hopefully it will work out, but it has cost me 12 points.
M

Buzzy said:
Made some transfers for this game week. Hopefully it will work out, but it has cost me 12 points.
Click to expand...

I think that may be the way to play it. I toyed with doing that this week but in the end only swapped Kane for Ronaldo, so expect a Kane hat-trick against Chelsea tomorrow out of nowhere!

mattmid said:
I think that may be the way to play it. I toyed with doing that this week but in the end only swapped Kane for Ronaldo, so expect a Kane hat-trick against Chelsea tomorrow out of nowhere!
Click to expand...

You know it!
Like you, i have gone for Ronaldo too, but at a 12.5 price tag, i have had to swing the axe more than i wanted to. The really bad news is..I have just found out that he is the most transfer'd player this week.

It was always going to be though, wasn't it.

Seeing all these points hits in here 😭 Rarely does this work out well, guys! If you find yourself compelled to do a -12pt hit, you're basically in Wildcard territory. That's if it's really necessary. Only injuries and absences can really make that the case. I generally avoid -8pts if I can. This season I've had one -4pt hit, and even that I'm unhappy with. It's leaking points.

The season is going okay for me. Couple of things I'm uncertain about going forward. But a good week – 80 point return (-4, so 76). Perhaps playing Pep Roulette and getting Ferran Torres in was very silly though. Just feels like another problem to solve now.

Still, up to 4th in the Evo Web league, 30 points off top spot with 368 total. Seeing more green arrows than red in general and that's a marker of success for now!

Buzzy said:
Made some transfers for this game week. Hopefully it will work out, but it has cost me 12 points.
Click to expand...

dayum bro, if 12 points, maybe WildCard is a better option?

One assumes almost everyone has Salah...
You must log in or register to reply here.