A thread for all fans of the Polish national team. 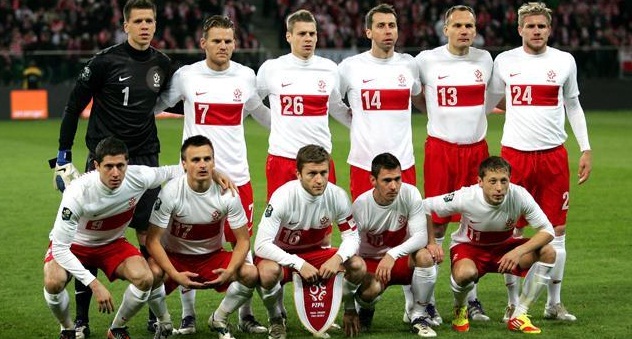 Perquis and Obraniak the two Frenchies are there because of ONE Polish Grandparent. They've certainly boosted the team! Good acquisitions!

And Bönisch is german with polish roots as I know
P

Kolia V said:
And Bönisch is german with polish roots as I know
Click to expand...

Tytoń undoubtedly one of the heroes of the match. Absolutely confident taking this penalty, immediately after the replacement, he saved his team from defeat, well done!

Frankly, because of this deletion Szczęsny quite considerably weakened the team, because Poland is the next match against Russia. Well, let's see how the young Tytoń will be catching balls from the Russian attackers.

Yes, well done Tyton and now he has a big chance to show his full ability against Russians. I think he'll find it tough but we'll see.

First half in match vs Greece was nice. Second one... I don't know. Maybe they thought that match is over and nothing bad can happen. Although Poland looked poor and Russia was amazing I still think that something unpredictable can happen. Russians probably won't be defending using whole team. And in counter attacks their chances will have players like Błaszczykowski or Rybus. Hope that they can save at least draw. It will be shame if goalkeeper will be polish hero third football event in a row.

My congratulations, it was a really good match for the Poland, but not for Russia.

In first half Poland was too scared of Russians. But second half was great. They got nothing to lose, they showed heart and who knows, they could win game. Tactics was great. Russians got ball possesion, but they couldn't create no good situations. But on the other side - many times, only one player attacking was Lewandowski, there was nobody for counter and he got 4 Russian defenders. Anyway in last match with Czech Republic, they need more offensive power, they need to open up more to score at least two goals because Czechs also will be playing for quarterfinals.
P

POLAND !Go for the dream! Living the dream! Lewandowski is better than Russian strikers- Pavluczenko, Kerzakow and Pogrebnyak

I think Poland can beat Czechs, and then will make it to second place and play Germany in Gdansk. This will be a be a very difficult game and I think it might be too hard for Poland against a top class Germany team, but I expect the game to be very close, maybe a single goal or extra time.

It was impossible to win that game with Stark.. Im really tired of that bullshit referee decision in favor of Poland in Russia and Greece game.

Poland's a good team but while I wouldn't say the referees were that bad or clearly favoured them, they certainly DID get the majority of decisions both against Greece and Russia!

Referees helping out the host team is nothing new though and has been happening for years unfortunately. As if the crowd, the atmosphere, the familiar surroundings aren't enough, whenever a team faces a host country, they also have to put up with many 50-50 decisions going against them.

Well, my friends, now we are brothers ... brothers in misfortune. I'm sorry, you have a very good team, but ... the Czechs were better. Good luck in future matches.

Unlucky lads, I was hoping you would do it, but Peter Cheh was like a human wall, impossible to beat him

feel sorry for this team and Poland fans, you prepeared amazing tournament..

Play Rafal Wolski next time in midfield. No link and no quality of supply to Lewandowski.

One feels for the Polish fans particularly after all the investment into stadiums and infrastructure which might have been better spent elsewhere.

Thanks for all 2015... had fun watching the games on Stadiums and with beer in front of TV

doesn't matter wins, losses, draws - even friendly games was worth to be in

someone less lazy than I did this video... so here it is... small summary of...

That was a helluva ride boys. Who would have thought that this, let's be honest average coach from polish league would be able to drastically change team's appearance. There has been some ups and downs, but mostly ups. Don't want to get too optimistic, but I feel like we can potentially do some damage at Euro.

I think Poland have finally found the way. They have a superstar in Lewandowski and have solid players alongside him, but most importantly they're finally a cohesive unit.

Euro tournament verify that all... but for now I find some positive change since I don't remember when... team is almost the same so had to be smth. from coach's side and good season of most players...

would be nice to write something good here too after last Euro2016 game... we'll see... now just shutp up and wait

The biggest problem for us is our midifield line, if we have just ONE player there so good as Denmark's Eriksen or Croatia's Modric or Colombia's James Rodriguez... we could win something more on EURO or WC and not just qualify and end tournament after 3 group matches

. Even Napoli's Zielinski performance in NT should be much better. Lewadowski, Piatek, Milik - world or european class strikers, but they need good passes from midifield