Serie A legend Gabriel Batistuta has announced his retirement from the game at the age of 36.

"I’m retiring from football and I thank everyone who has helped make my career so successful," said the former Fiorentina, Roma and Inter star.

"I will certainly continue in football in a different role," he added. "I will continue with my contractual, publicity and managerial commitments and finish my studies for coaching."

Batigol, as he was known in Italy, has decided to quit just days after he terminated his contract with Qatari club Al Arabi.

He took that step following an injury-plagued year in which he appeared in only three matches and scored no goals.

The Argentine joined Al Arabi in the summer of 2003 after spending over a decade in Italian football.

He joined Fiorentina in 1991 and became a Viola legend, staying there for nine years and even remaining loyal by playing in Serie B for a season following shock relegation.

He eventually left the Artemio Franchi in 2000 when Roma paid £20m for his services. He instantly paid them back with the goals that saw them lift Lo Scudetto.

Batistuta, who hit 56 goals in 78 internationals, ended his Italian career with a six-month loan spell at Inter once it became clear that his best days were behind him.

What a legend.... a great moment was during his first season with Roma where he scored a volley against Fiorentina, then began to cry.....
Then there was this season when Fiorentina got promoted, he wanted to play for them but his team in Qatar didnt allow him to move back.

A legendary striker, I haven't seen anybody like him to this day.
We will never forget you, Batigol..... :cry:
Last edited: 14 March 2005

1969: Born on February 1 in Reconquista, Argentina

1992-93: Despite his 16 goals in 32 games, Fiorentina are relegated. Batistuta turns down offers to move to other Serie A sides.

1993-94: Scores 16 goals in 26 matches to take Fiorentina back into the top flight at first attempt.

June 1994: Hits hat-trick in his World Cup debut against Greece.

1994-95: On target in each of his side's opening 11 matches of the season to set a new Italian goal record. Ends campaign as Serie A's top scorer with 26 goals from 32 games.

April 1996: Grabs his 34th goal for Argentina in a 3-1 victory over Bolivia, equalling Diego Maradona's record.

May 1996: Scores in both legs of Italian Cup final as Fiorentina beat Atalanta Bergamo 3-0 on aggregate to claim their first major trophy in 21 years. It was the only title Batistuta won in his nine years in Florence.

November 1997: Recalled by Argentina after being dropped for 10 months.

June 1998: Grabs hat-trick at World Cup in 5-0 drubbing of Jamaica. Becomes father for third time the day before Argentina's quarter-final win over England in which he scores his side's opening goal.

1998-99: Scores 13 goals in first 13 matches of season to help Fiorentina to the top of Serie A. When he is sidelined with a knee injury in February their title push falters and they finish third.

May 2000: Scores hat-trick on final day of season to break Hamrin's Serie A record. Bursts into tears after scoring his third goal in his last match for the Florentines. His final tally for Fiorentina is 168 goals in 269 league appearances.

2001-2002 - Injury and lack of form contribute to a disappointing second season at the Olympic stadium in which Batistuta manages only six goals. His last World Cup ends in sadness as Argentina are knocked out in the first phase. Batistuta confirms his international retirement.

2002-2003 - Frequently finds himself left on the bench by Roma before moving to Inter Milan.

9 Years as a loyal Viola, him and Rui Costa were stunning together.
J

I loved his celebration he was a legend.

Milanista said:
What a legend.... a great moment was during his first season with Roma where he scored a volley against Fiorentina, then began to cry.....
Then there was this season when Fiorentina got promoted, he wanted to play for them but his team in Qatar didnt allow him to move back.
Click to expand...

What a great moment. There's also the time when Fiorentina play Man Utd and scored an amazing goal from way way out when it was least expected, typical Bati.
Winning the Scudetto with Roma was awesome. 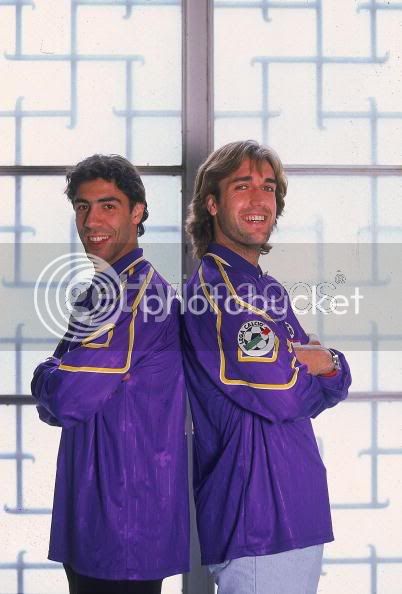 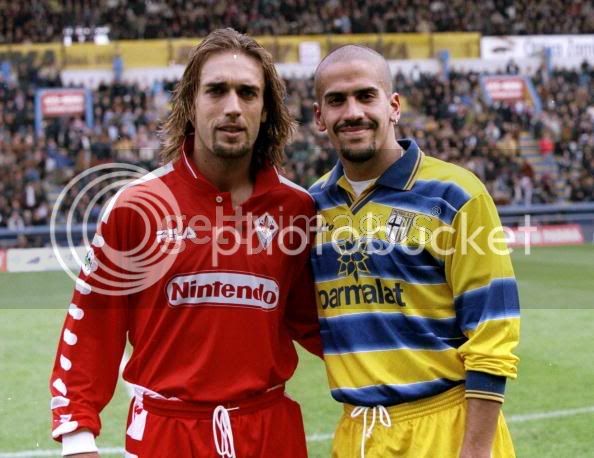 ) and Inter in his career.

Those were the days. 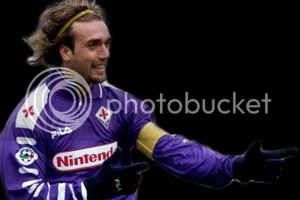 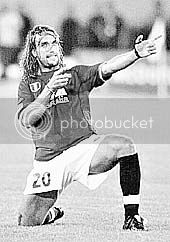 Did you Say BOOTS - Pk

in the boots thread

This is a warning, stop spamming. The forums are a place for discussion, not attention seekers.

juventus11 said:
His celebration was class.
Click to expand...

Thats twice you have said that :roll: :applause:
C

He was the best striker i´ve ever seen.
I think, in my generation, (i´m 23) there was no one compared to him. Maybe Romario only.
And, for your surprise, I´m brazilian.
S

He was a striker in every sense of the word. This man could hit a ball with so much power and accuracy that he could pretty much score from any angle. Pure legend, especially against Man Utd in the CL, and for Roma in the Serie A (when they won the scudetto).

is back...but for how long?

Its in reference to Batistuta that I am called Butatista. That was his his name on the orginal Pro Evolution Soccer and it kinda made me laugh.

He's a legend and his machine gun's celebration is a legend also. I think his peak time is when he is in Fiorentina.

Magnificent striker, one of the best and one of my favourites of all time.

Remember how great he was with Fiorentina and wondered why he stayed there so long, seemed to love the clubs heaps.

there will neva be another player as loyal as him... every other player wld have jump ship when thier team got relegated. but not good ole BATIGOL... we will always remember him and his goals.... 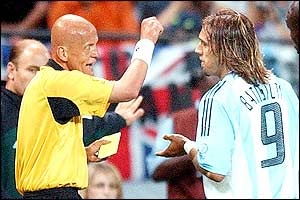 One of the all time greats.. i remember Butatista on Pro Evo Soccer and ISS Pro Evo on the PSOne.. he had a BULLET shot.. scorchio!!

I witnessed his amazing power when he nearly took off David Seamans arms when the Arse played Fiorentina at Wembley...

Heinrich broke from midfield and charged towards the box but was forced wide, he passed to Batistuta who ripped a rocket-shot past Seamen from an acute angle.

Remember that goal, remember hearing the 'whack' hitting the net when he scored, great power.

The only avatar I've ever had here is a Bati avatar.
I remember how he'd sometime shoot free kicks directly at the Keeper's corner instead of trying to bend over the wall, it was so fast and powerful the keeper didn't have a chance. You could also do that in WE4 or 5.
Once with Roma he took a free kick and it hit one of the guys in the wall, poor guy fell over and had to be taken for treatment.
His goal in the last world cup was also amazing. People were talking about how his time had come and he suddenly scores the most amazing header.
Italian fans used to hold up banners with the Batman logo that said "Batigol" on them.

Or his debut goal against Lecce during the season Roma won it. Score was 4-0, he shoots from pretty much the edge of the 4 yard box (where the line meets the out line) and it hits the crossbar and goes in at an amazng speed, probably bent the crossbar too.
You must log in or register to reply here.

eBay - Selling to someone with zero feedback

FOOTBALL - IF YOU COULD CHANGE THE RULES?
2