Maxi Rodriguez, Maxi Lopez, Maxi Biancucchi, Maxi Moralez or one of the others?

What I saw against Ecuador was pitiful. What was ORBAN doing on the field wearing the shirt!? Where is the defence again!? I saw no offensive intentions, no playmaking, just useless passing, not even intelligent passing. Boring. Horrible. We were motionless against Ecuatorian attacks.

If we keep on like this I think we're going back home in less than a week...

What a disappointment this half has been. We're in the lead, yes, but we don't look like we deserved it at all.

At first when we scored I was thinking this could only get better from now on, I was so wrong... the team lost momentum as the game went on and became totally numb then.

And what's with the lineup? The players are looking scattered all over that pitch with no purpose what so ever. A 3-5-2 should've pushed Bosnia back and make them play the ball more centrally where our mids could recover it, instead they're playing it wide and are bossing those flanks (especially on Rojo's side). What's Messi position? He's been all over that pitch and I'm still waiting to see Maxi take part in anything. I understand that this is a new tactic and the players are yet to get used to it (one more reason why it shouldn't have been used) but there is barely any link-up at all, even when there is, it's either too sloppy or not quick enough to get passed the Bosnians.
Hope Sabella got something up his sleeve, because at this rate it looks like Bosnia are going to score and win it too.

PS: I don't know why, but I have a feeling Romero is going to make a blunder soon.

You saw the same as me

Much, much better 2nd half.
Surprisingly the inclusion of Gago (a player which I genuinely hate) was very beneficial to the team, he put on some nice passes and he helped define Di María's action zone; that in itself was a game changer: it made Di María's incredible energy more useful, instead of wasting it on free roaming around the field, he became far more dangerous as he hugged the line and took on Bosina's RB. That is until Mujdza was subbed.

As for Messi: He looked more in his element after Papita came in, he gradually took control of the game, even manged to score (which is the least you can expect from a player of his caliber).

Overall, I think it was a good game, not spectacular but decent. Sabella's tactical change made a whole difference, players got more comfortable and that translated into better performances from the key players.

There are still some issues that needs to be fixed (defence mainly) Hope they'll get sorted it out eventually.
Last edited: 16 June 2014

We went back to the first half after Ibisevic's goal. Romero turned into the old Romero.

As I've stated before the world cup, Argentina has a faulty and unbalanced team. There is no midfield. There is no team. You cannot have a midfield of Mascherano, Di Maria, and Maxi Rodriguez. Look at France playing with 3 central midfielders Cabaye, Pogba, and Matuidi. And Argentina barely has 1 central mid in Gago and possibly Biglia.

I still can't find the reason why we kept crossing balls while having strikers no taller than 1.75m and provided that we FAILED in that over qnd over again.

As I've said, I believe that is due to a lack of balance in the midfield which ends up creating a disconnected team. Argentina has failed to clearly dictate and dominate any of their games so far, and this was also apparent in the friendlies that I have watched.

You cannot have a midfield of a full-fledged DMF (Mascherano) and two wingers converted into CMF's (Di Maria & Maxi) behind 3 attackers and expect a balanced team. The dilemma of having too many great attackers and not having/picking enough balanced midfielders is haunting the Argentinian team. There is no Cambiasso, Veron, or even Riquelme type player for ball distribution and tempo dictation.

So far 2 magic Messi goals keeps Argentina in the game against one of the easiset groups in the tournie.

Rumor has it, Pekerman is going to become the new coach (again)

Banega and Biglia's performance were woeful. They just couldn't hold the ball or recycle possession. There is literally no game plan.......Nothing. 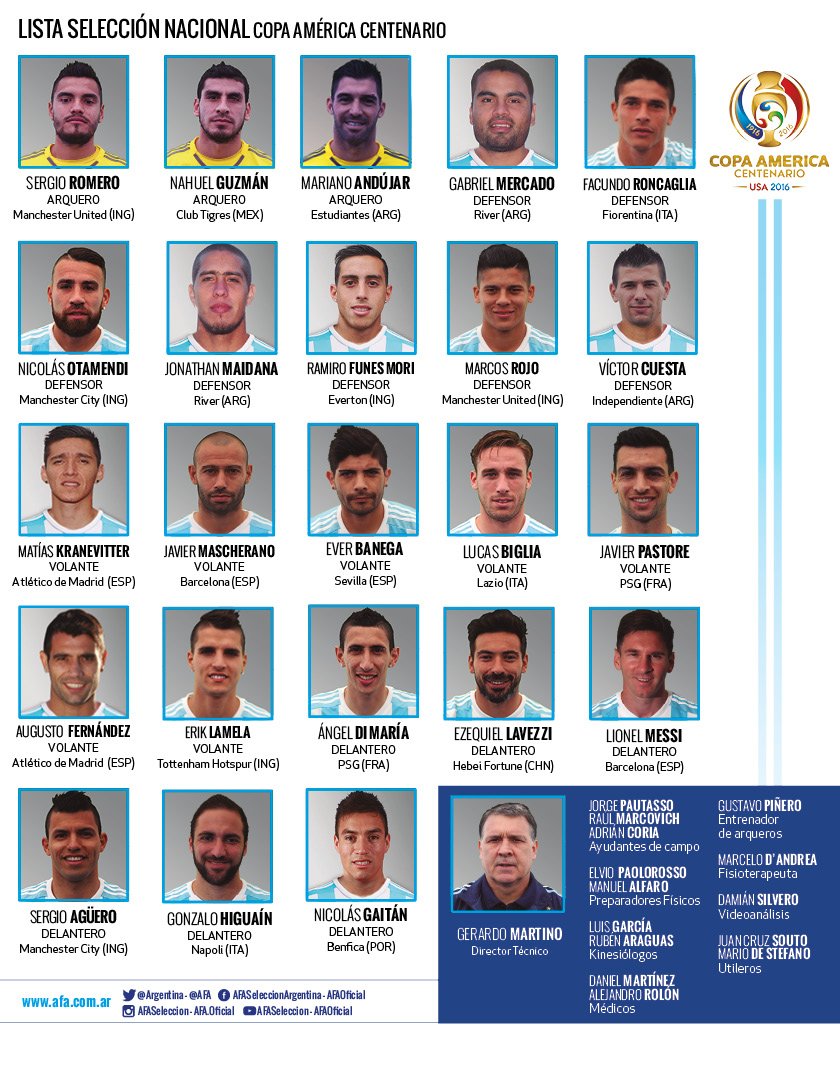 so Messi retired from NT, wonder if it´s forever or just from the sadness..

Looking for a Manager

PIPA23 said:
so Messi retired from NT, wonder if it´s forever or just from the sadness..
Click to expand...

Well the country of Argentina said 'Don`t come back if you don`t win' then you get this from Diego .

"He is a great person, but he has no personality," Maradona said. "He doesn't have the personality to be a leader."
Click to expand...

Its sad to be a winner and lose at one thing and quit!

It doesn't end there - Alexis Sanchez has also been the victim of Messi's dirty tactics. Sanchez signed for Barcelona from Italian side Udinese in 2011 for just under £40 million. Messi said "Considering how bad you are, I've no idea how you cost so much," and, "Stop shooting so much and give me the ball."
Click to expand...

I`m sure CR is worse then Messi ...he claims to be the best player in the last decade

CR says everything out to the press, so everyone knows exactly what he thinks/feels

Messi keeps it all personal and under wraps, so no one really knows the real him unless you know him.

It is sad to be in the losing side for 4 finals (3 in the past 3 years), but I still feel it is the feat of a quitter to just give up. Especially when you are supposedly the best in the world right now and at your prime. And he has a solid support group as well...

Looking for a Manager

That penalty, and then retire, ok.

↓
"He doesn't have the personality to be a leader."

Well time to revive this thread. Twenty five years without a trophy. It is criminal. The country continues to produce top end talent. Well maybe aside from goalkeepers although Portau of Estudiantes is a bright hope and Axel Werner is getting plenty of football now at Huesca.

What is most upsetting is that the young players who should have been in Russia this summer are now being picked by interim manager Lionel Scaloni (because Gareca had enough of waiting for the AFA who have not got the proverbial pot to pass water in).

Lo Celso and Asascibar are two bright hopes the former who played zero minutes at the World Cup while Die Maschine was overlooked for those two midfield engines of Biglia and Mascherano.

Nicolas Tagliafico and German Pezzella are the captaincy candidates and both wonderful people off the pitch. So much youth coming through. Added to which Dybala and Icardi have a chance to claim their spots now. Ezequiel Palacios is another candidate for the midfield but he along with several other youngsters need to make the right career choices in terms of their development.

Far too many kids jump to Europe early. They don't play enough first team football at a crucial time for their development and often enough end up wasting their potential. Tagliafico is one who managed to resurrect his career after leaving Banfield moving to Murcia where he was hardly use before resurrecting himself at Independiente.

Underlying this is still the AFA and its President Claudio Tapia. It is still not fit for purpose. Tapia himself is a non descript fool who never ran anything more than a small local club in Argentina. The organization needs total reform with people who understand football development and football as a business (especially with this upcoming 2030 World Cup bid with Uruguay and Paraguay) and honest gentlemen like Zanetti, Batigol and company running it. Not shady individuals whose own interests are deemed more important than that of the Albiceleste.

I also think it's time for Messi the GOAT to hang up his boots for Argentina. For next years Copa just Kun and Otamendi should return from the older guard along with the superb Armani in goal.


​
Will be missed but never forgotten. Gracias Leo.

Messi conditions the team he is in. Any team.
Without even speaking. Players around him know they MUST pass the ball on to him. And they do that regardless of whether or not there's a better team mate positioned for the next move. "MUST. PASS. THE. BALL. TO. MESSI" no matter what.
Not saying it's Messi's fault. Unfortunately, the same thing happened with Riquelme.
These type of players, even if they are different between each other, feel the burden of carrying the weight of the whole team. When the team wins, everybody praises THEM. But when things go south, everybody blames them as well.

I think Messi might be the greatest player of all times, but I think that Argentina need to do without him, in order for us to be a real team again. With 11 guys that work hard, run and play football the best they can. And not 10 guys waiting for the other 1 to resolve the issues and make them win the game.

..not even close to be honest, his childish behavior of resigning and then coming back, then the first rounds on the WC, barely moving on the pitch (that one goal later was great thou), it's all not good regarding his legacy, he's not the (working) man's player anyway, I would rate him below Di Stefano, Maradona and even Pedernera in that sense. (all technical skill aside, that is, no doubt about all that and all the stats on the club side, too)

Congratulations Lionel Messi! Even though Di Maria was the one who saved your ass today LMAO

Argentina were good for it. Brazil just too wasteful. That said, Argentina had their profligate moments too, none more so than Messi at the end!

cosmo said:
..not even close to be honest, his childish behavior of resigning and then coming back, then the first rounds on the WC, barely moving on the pitch (that one goal later was great thou), it's all not good regarding his legacy, he's not the (working) man's player anyway, I would rate him below Di Stefano, Maradona and even Pedernera in that sense. (all technical skill aside, that is, no doubt about all that and all the stats on the club side, too)
Click to expand...

This did not age well.

_TheSpecialOne_ said:
This did not age well.
Click to expand...

PotatoCouch said:
Congratulations Lionel Messi! Even though Di Maria was the one who saved your ass today LMAO
Click to expand...

That's why it's a team game.

Abishek said:
That's why it's a team game.
Click to expand...

imagine if Brazil scored another goal, you probably would've cursed Messi too for slipping, in that 1-on-1 situation with Ederson.

PotatoCouch said:
imagine if Brazil scored another goal, you probably would've cursed Messi too for slipping, in that 1-on-1 situation with Ederson.
Click to expand...

True. But reaching a final is a hierarchical process. You climb up a ladder one step at a time. Most people dilute the journey in search for the destination.
You must log in or register to reply here.