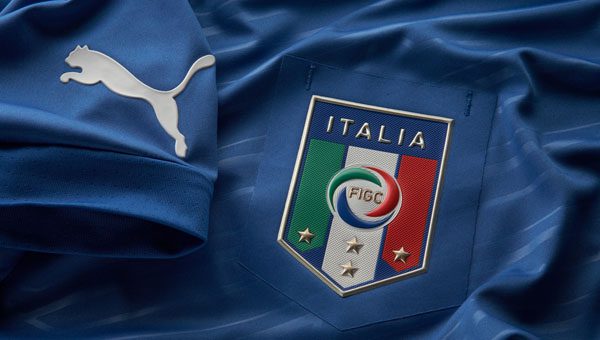 Felt like time to open a new home for everything Azzurri related.

Just thought you should know that I'm a huge advocate of Prandelli. I agree with his selections and I like his mentality and vision for Italian football. He even called up 2 Serie B players - this makes any Italian player feel like they have a chance for the national team - bringing a real culture of earn-your-place.

Fuck man, we have so much attacking talent it's unreal!

Too Black, Too Strong

It feels weird seeing an Italy side without a Prima Punta.

Fuck man, we have so much attacking talent it's unreal!
Click to expand...

Would do much better.

my favourite lineup would be quite similar to dominic's

i'd pick balzaretti over criscito only because i don't follow russian premier league, so i don't know how well criscito is doing lately, while having followed balzaretti closely, i can tell him and miccoli were the only reasons why palermo is still in serie a.

as for the offensive department, i think cassano and di natale are the most reliable options. they are the ones with most experience and talent (sure giovinco, balotelli, borini, they're all hugely talented, but they're not world class as di natale and cassano... at least not yet).
besides, as abou mentioned we don't have a single proper "old fashion" CF and, although di natale either isn't a real prima punta, he's the closest thing to a pure scorer we have (he's the only +20 goals per season forward in this team).

however there are some question marks. di natale isn't a youngster anymore, when u're 34 it can be difficult to find a decent form in june, after an entire season as a starter for your club.
and there are also doubts about cassano's form, since he's been out for almost the entire season. however that might also turn out to be a huge advantage for him. having rested for the best part of the season, he's fresh and his muscles won't be stressed at all. so if he follows a good athletic preparation program and manages to reach a good form in june, he could be on fire (as if it was september and the season was just beginning).

in any case i think we're gonna rotate a lot upfront and even borini, destro and giovinco will have their chance to shine. borini and destro have been absolutely amazing all season long and if their form is still on that level, then they might well claim the starting spots.
giovinco for me is the natural backup for cassano (wich means that i'd have him as a starter if cassano isn't in a good form). of all our forwards he is the one who is most likely to look for 1 on 1 situations (wich is something we desperately need). it's not that cassano, balotelli and di natale have a poor dribbling (of course).... but the thing is sebastian has more balls and confidence than anyone else upfront..... he's the kind of guy who would look right in pique's eyes and think "pff, i can take this guy on everytime i want".

and then there's balotelli, who is the usual big question mark. if he can be bothered playing, than not even an on form borini or destro nor a fit di natale can question his starting spot. but if he shows even the slightest sign of lazyness and sloppyness, then i wouldn't even write his name in the team sheet and leave him at the team's hotel.

long story short, the upfront setup is a bit of a conundrum, as every player has almost equal chances to play, but the rest of the lineup is pretty much unquestionable to me (except for the criscito\balzaretti spot and the marchisio\nocerino spot maybe).
too bad prandelli doesn't seem to be willing to deploy a 3 men defensive setup (wich means the actual formation will probably look comnpletely different from what i'd like to see).

one thing is for sure. this is a talented but unexperienced and lightweight team. wich means that if most of our players reach a good form we might well become the surprise of the tournament.... but if we don't we might just as well get out at the group stage (especially considering how tough is our group). it's gonna be interesting to see what this team can do.
Last edited: 27 May 2012

???
i'm probably making an idiot of myself but what does "olive" mean?

any of u guys know the calendar of the friendlies leading up to the tournament? who will we be playing and when?

for the friendlies, check this link.

LOL! sometimes i'm just amazed by my own shrewdness... i couldn't have figured that out in an entire day

thanks for the link btw. so we're playing luxembourg next week.... that sounds challenging!

Too Black, Too Strong

On the subject of the 3-man defence, James Horncastle wrote an interesting piece on it a few days back:

Apparently Criscito is out of the Euros because of the betting scandal.

Shame about the earthquake, of course for the people, but I would've liked to watch the match tonight. Poor Prandelli though, seems the preparations for the Euros are cursed.


Aboutreika18 said:
On the subject of the 3-man defence, James Horncastle wrote an interesting piece on it a few days back:

very good piece that is, thanks for the link. i completely agree with horncastle. lining up a trequartista would make very little sense imo.

DamjanStefanov said:
Shame about the earthquake, of course for the people, but I would've liked to watch the match tonight. Poor Prandelli though, seems the preparations for the Euros are cursed.
Click to expand...

the thing is it would have been very distasteful to have a football match after such a disgrace..... not to mention the danger for the spectators. the situation in emilia romagna is pretty serious right now

in any case, it wouldn't have been much of a test against the likes of luxembourg anyway.

Still though, I haven't been able to see much of the Italian side. Of course I understand it isn't safe but it's pity as I would've liked too fill up my boring tuesday night with some calcio.

But as you said, it's dangerous and distasteful to play the match.

yeah i also was looking forward to see them to be honest. like horncastle said in that article above, there are 2 italys.... we were absolutely fantastic up until last november... then the 2 friendlies against uruguay and usa were absolutely horrible... so it would be nice to see what italy we should see playing in june.

Yep and I'm looking forward to the friendly against Russia.

Btw, this was the starting line-up I used to win the Euro's in PES 6.

Lol @ Giovinco and Giaccherini, they look like little schoolboys between the big men.

Classy of them to take the picture in suits, but I guess that's Italian for you.


DamjanStefanov said:
Lol @ Giovinco and Giaccherini, they look like little schoolboys between the big men.

indeed. btw how tall is ogbonna!

wow, u're really fired up about this, are u!

what are your expectations on this torunament, stef?

Prandelli has some ideas! He didn't want a pure striker and is looking to try Cassano as a centre-forward and maybe Balotelli out wide with the three attack formation.

“We’ll try two systems tomorrow. The first will be with just two strikers and four midfielders. The second will be with a trident attack – with two wide forwards and a small centre-forward.

“The latter will be Antonio Di Natale or Antonio Cassano or Sebastian Giovinco…”
Click to expand...

And yeah he is keen on Montolivo! Maybe he'll get the best out of him but really doubt it. Did I mention Gattuso saying in a way Montolivo needs to grow some balls to succeed?

Hoping Chiellini can make it back in time for the Euro's...

indeed. btw how tall is ogbonna!

wow, u're really fired up about this, are u!

what are your expectations on this torunament, stef?


Indeed. Though I like the fairytale behind Giaccherini's inclusion, Pepe would've been a more obvious choice.


Zeem said:
Prandelli has some ideas! He didn't want a pure striker and is looking to try Cassano as a centre-forward and maybe Balotelli out wide with the three attack formation.

And yeah he is keen on Montolivo! Maybe he'll get the best out of him but really doubt it. Did I mention Gattuso saying in a way Montolivo needs to grow some balls to succeed?


Olivia really is the only problem with that line-up.

oh for the love of God! i thought we were done with all this nonsense once we got rid of lippi. what the hell is prandelli smoking!!! di natale out wide????!!! he can't play there! he hasn't played on the flanks in years, because marino, guidolin and even di natale himself said that he has not enough stamina anymore to play in that position... that was the very reason why he moved to a central position in the first place!!!! and now prandelli wants to line him up as a winger??!!!! in JUNE!!!!????

i don't know what's more insane, this or lining up montolivo as a starter!!!!

zeem said:
Did I mention Gattuso saying in a way Montolivo needs to grow some balls to succeed?
Click to expand...

riccardo is 27 years old. he's not a youngster anymore, he's a grown man now. we might aswell put our mind at ease, because if he didn't show any sign of personality in the last 3 years, at this point in his carreer (and life) there's no valid reason to believe he will ever grow a backbone.
montolivo as a starter.... this is simply unbelievable. honestly if i were aquilani or conti or cossu i would be furious right now.

Dominic said:
Olivia really is the only problem with that line-up.
Click to expand...

i think we finally found a proper nickname for riccardo!!!
Last edited: 1 June 2012

From that quote I think Prandelli meant Di Natale is a candidate to be one of the small centre forwards.

that would make much more sense. if that's the case, we just have to hope montolivo will get an harmstring strain (hopefully tonight itself), and we're ready to go

Or breaks a nail.


Dominic said:
Or breaks a nail.
Click to expand...

You must log in or register to reply here.